In 2019-20, we published two people-detection datasets, HABBOF and CEPDOF, with video frames captured by overhead fisheye cameras that were annotated using rotated bounding boxes aligned with a person’s body. We also manually re-annotated a subset of the Mirror Worlds (MW) dataset with rotated bounding-box labels, that we refer to as MW-R. Although these datasets are very useful for developing and evaluating people-detection algorithms, they have been recorded in staged scenarios, where people move according to pre-defined patterns (e.g., everyone starts moving at the same time and performs similar actions). Furthermore, the variety of scenes and person identities are very limited. Therefore, the performance of state-of-the-art algorithms in naturally-occurring scenarios, to be expected in real life, remains unknown. Clearly, a challenging dataset, recorded in-the-wild, with a large variety of different scenes, actions and people is essential for further advancing this area of research.

Therefore, we introduce a new benchmark dataset of in-the-Wild Events for People Detection and Tracking from Overhead Fisheye cameras (WEPDTOF). While preparing WEPDTOF, we focused on several deficiencies of the current datasets. First, we collected in-the-wild (non-staged) videos from YouTube instead of recording our own videos with a constrained variety of people and scenarios. Second, we selected videos from a variety of indoor scenes recorded by different overhead fisheye cameras mounted at different heights. Third, we focused on videos with real-life challenges (e.g., severe occlusions, camouflage of a person by adjacent background, crowded spaces) to allow performance assessment similar to an application in practice.

WEPDTOF has been produced at the Visual Information Processing (VIP) Laboratory at Boston University. WEPDTOF consists of 16 clips from 14 YouTube videos, each recorded in a different scene, with 1 to 35 people per frame and 188 person identities consistently labeled across time. The table below shows the statistics of MW-R,  HABBOF, CEPDOF and the new WEPDTOF. Compared to the current datasets, WEPDTOF has more than 10 times the number of distinct people, approximately 3 times the maximum number of people per frame, and double the number of scenes.

The figure below shows a sample frame from each video in WEPDTOF together with its annotations. 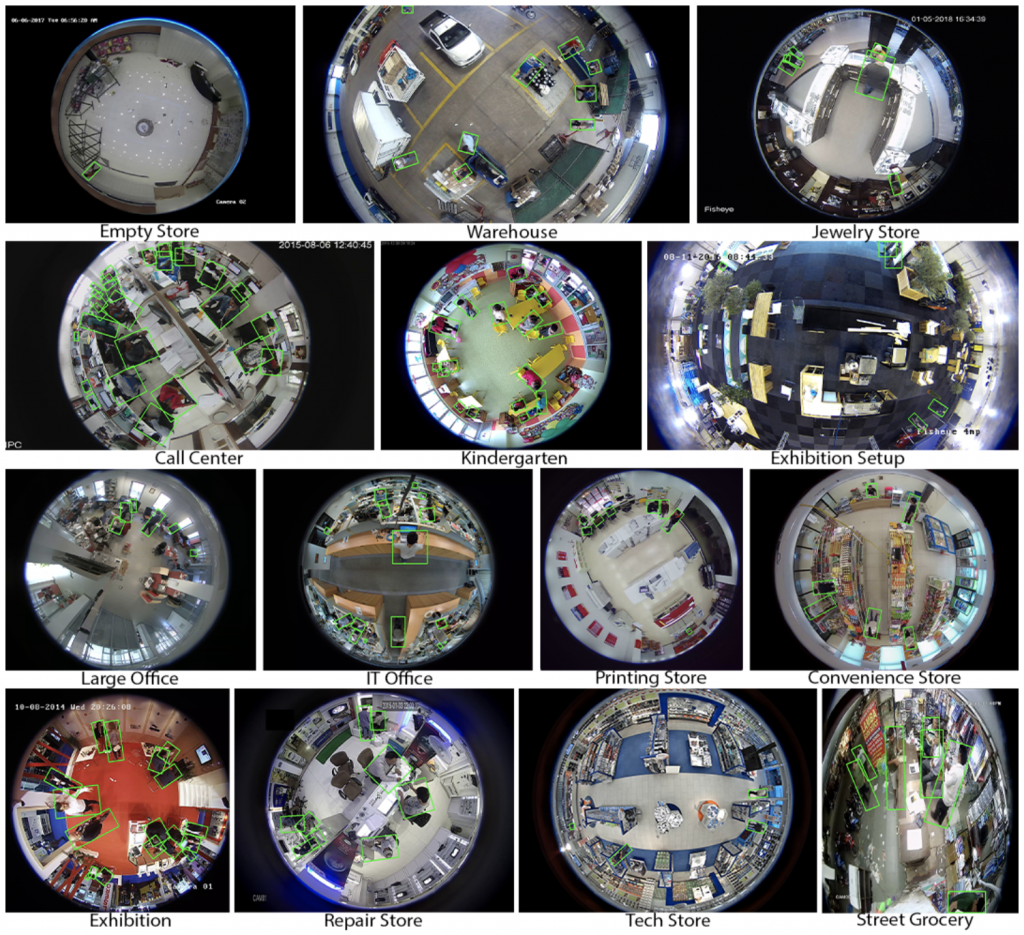 The table below presents details of each video in WEPDTOF. 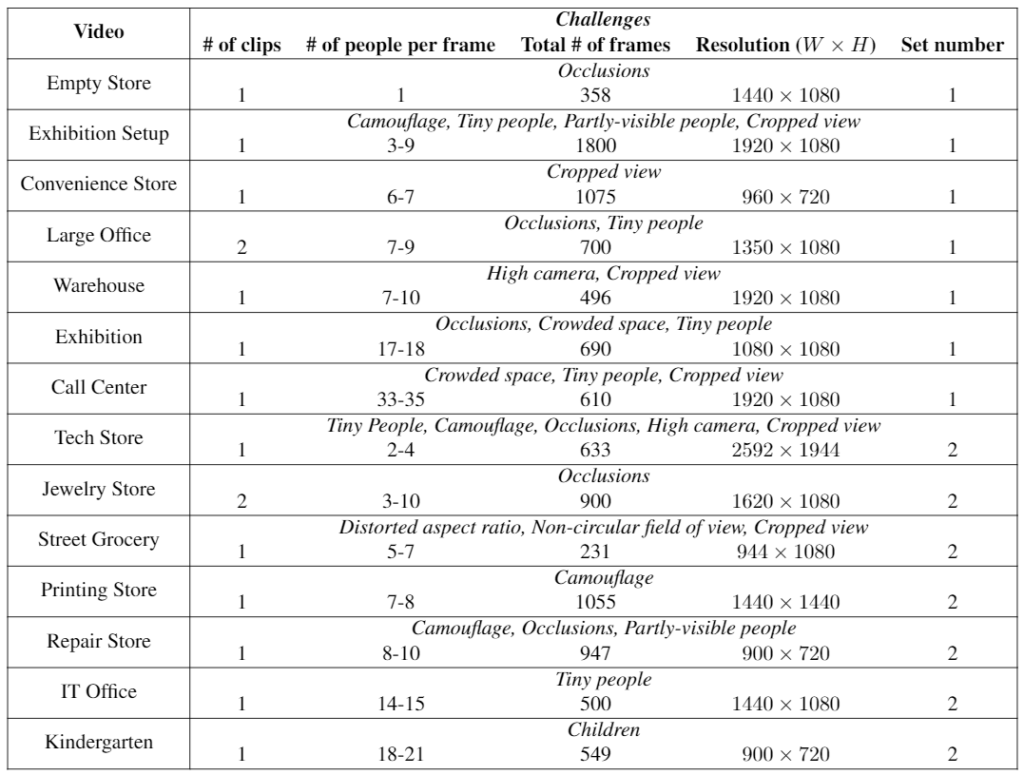 The salient characteristics of WEPDTOF are discussed below.

WEPDTOF annotations use the same format as the one used in the CEPDOF dataset. Therefore, the visualization and evaluation code provided with the CEPDOF dataset apply to WEPDTOF as well. To learn more about the annotation format and the software toolkit, please refer to CEPDOF dataset page. In WEPDTOF annotations, we exclude some of the areas that are close to the field-of-view periphery since people appear very small and close to each other making it nearly impossible to annotate accurately. These excluded regions are identified by means of a binary region of interest (ROI) map for each video. The figure below shows an example of ROI for “IT Office”.

Left: Sample frame from “IT Office”; Center: ROI map for this frame; Right: The same frame shown within its ROI map.

Similarly to CEPDOF and MW-R, bounding-box annotations of WEPDTOF are temporally consistent, that is bounding boxes of the same person carry the same ID in consecutive frames. Therefore, WEPDTOF can be used not only for people detection from overhead fisheye cameras but also for tracking and re-identification.

The video below shows short annotated clips from all videos in WEPDTOF.

You may use this dataset for non-commercial purposes. If you publish any work reporting results using this dataset, please cite the following paper:

Please contact [mtezcan] at [bu] dot [edu] if you have any questions.

The development of this dataset was supported in part by the Advanced Research Projects Agency – Energy (ARPA-E), within the Department of Energy, under agreement DE-AR0000944.

We would also like to thank Boston University students for their participation in the annotation of our dataset.